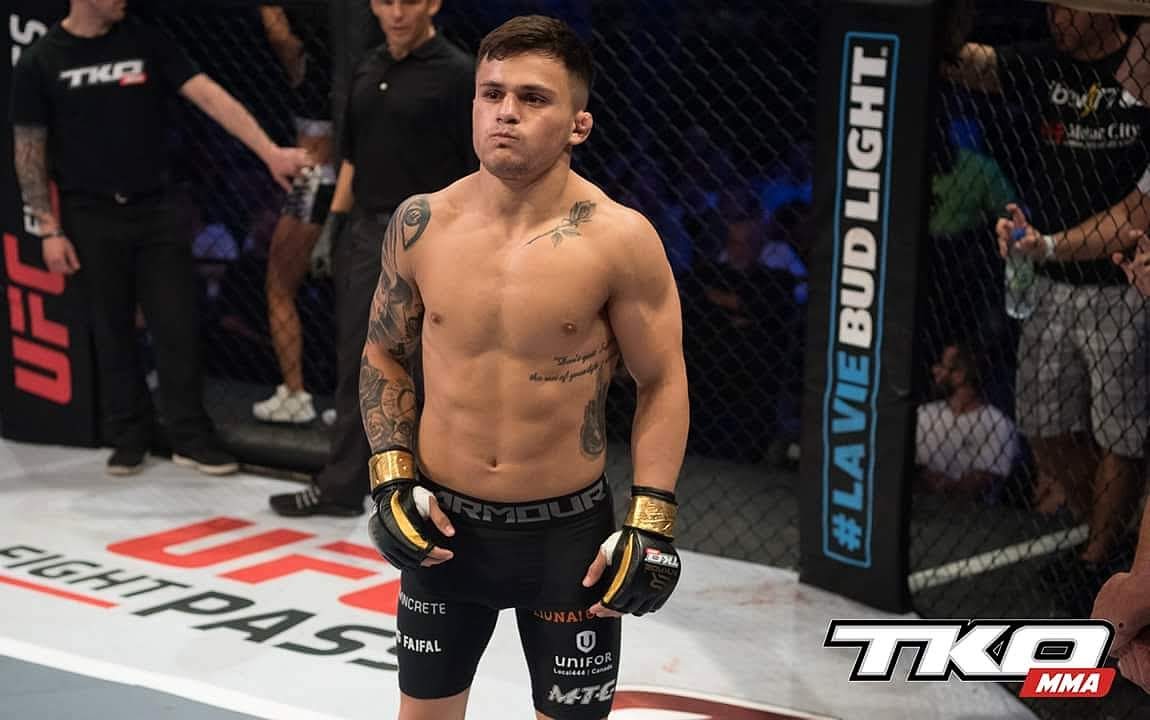 T.J. grew up in Windsor’s east end with his parents and siblings. He’s been in the area for as long as he can remember. Sadly, in 2005, he lost his older brother and his mother. Not long after they had passed away, he moved in with his aunt for close to five years. Near the end of grade eight, he moved back in with his dad. And so began his passion for Mixed Martial Arts.

In his first year at St. Joseph’s Catholic High School, T.J.’s dad introduced him and his younger brother to UFC. The bond between the Laramie men then grew stronger. At first, he was simply a fan, but quickly realized that he wanted to challenge himself in the sport he liked to watch so much. He started training at Maximum Training Centre (MTC) under Rino Belcastro, and things took off.

Once he had some experience under his belt, as well as an impressive resume of titles, it was time to enter the cage professionally. Aged 17, T.J. flew out to Japan in March 2015 for his first professional fight. He fought an experienced veteran of the sport, and won via TKO in two and a half minutes. And that was just the beginning. Though he had to wait until the age of 18 to fight professionally in North America, he continued to train and push himself. Eight months later, in November, he made his Canadian debut for Hard Knocks Fighting. Again, he was victorious

His next fight came a couple of months later, in January 2016. In just 25 seconds, T.J. was able to knock out his opponent. After throwing a pair of left-handed punches, he connected with a right that instantly dropped Yvon Agenord. Following this week explosive professional breakout TJ continues to have success in his professional career. Winning the TKO Major League MMA 145lb title against now UFC featherweight Charles Jourdain.

Aside from his fighting career, T.J. got a job in his teens before discovering his second true passion – cutting hair. There was something about a fresh haircut. He would spend time at the barber’s every week. With the help of YouTube videos, he practiced some cuts and styles at home. At the age of 16, he was cutting his friends’ hair regularly out of his house. Fast-forward a year and a half, an opportunity arose. He contacted Mike Lauzon, owner and head barber of The Chop Shop, located on the corner of Tecumseh Road and Tourangeau Road. Lauzon gave him a shot and soon, good became great; his cuts kept getting better with time. Now TJ works out of Padrone Barbershop on Dougall avenue. Very close to his home base gym Maximum Training Center.

As of now TJ is currently ranked 3rd in Canada in his weight class and every day pursuing his dream of being the best fighter in the world.